The most powerful woman at the BBC had every reason to question what style she wanted to create for television news.

A new form of film communication was sweeping the Western world. Its progenitor called it documentary and while one of its main purposes was to make sense of the world’s fractured social change by documenting stories, it displayed a more threatening appearance to BBC Producer Grace Wyndham Goldie.

In the Land of Promise which charts the birth and movement of documentary Ian Aitken writes.

John Grierson, a dour Scott, was riding high with his idea of a film form that was the antithesis of fictional cinema – whose industry was also soaring.

Wyndham Goldie had other options.  The mass media form of cinema was popular and could guarantee audiences. In British cinemas playing at that time were Westerns in John Ford’s Duel in the Sun, Noir in Double Indemnity and for British contributors Carol Green’s Third Man and Jon Boutings Brighton Rock.

Green’s Third Man and Hitchcock’s Foreign Correspondent featured a writer and journalist as their themes enveloped in sleuthing and daring dos. Hardly, anything near real-world journalism.

Welles came closest. The precocious Orson had captured a future of journalism in Citizen Kane from a fake newsreel produced in a cinema style of shot-continuity. But Orson’s vision would not do either. Cinema was too suggestive, even though the Italians were stripping it of its excesses in films like Pickpocket (1959).

However, as Wyndham Goldie writes in her autobiography, she was against the idea that one person’s (Grierson) unfettered truth  in documentary making could not be challenged. And her bosses, notes Professor Steven Barnett at the University of Westminster, associated film with Hollywood movies. Documentaries ambition to empower was simply unacceptable.

This was the crossroad.

When Hitchcock calls Grierson a great cinema maker in Scottish Television’s 1965 production , it is not by accident. For Grierson film’s as seen in The Heart of Scotland were reportage, without the reporter – what Hitchcock calls poetry in motion.  Robert Drew would conform a style, sans reporter, he defined as Cinema Verite.

The fact was few in broadcasting knew how to exploit cinema’s factual framework. The Russians did and so too did Grierson. When he wasn’t overtly suggesting social change, his documentaries were cinema.

If it (camera) was placed in certain ways with cunning artifices it could convey  emotional aspects of whatever it was filming,

The BBC’s statutes, however, pressed for information which was politically neutered. Not to mention the Director General Sir William Haley took a keen dislike in television, intensely.

By experimenting and competition, catalysed by the introduction of ITN news in the 1950s, television news would yield a style crafted from the newspapers and standards from radio.

The conditions that forged news were specific to their times. Sixty years on a growing number of professionals recognise that while conditions have changed, TV journalism has not, says Deborah Turness, now President of NBC News.

If journalism is the art of negotiating a problem and synthesising a solution to inform others, then what tools and style does modern journalism employ? Many, such as Turness have tried to reform the news package by deconstructing it into its constituents and presenting these to the audience. It didn’t work she says. The answer, however, lies at the source – understanding news as a language just before its inception.

That is he gap between not knowing what to do, but being presented with a burgeoning technology, whilst being prescient and pragmatic in understanding what it socially and culturally may do. The Sykes, Crawford, Selsdon, Ullswater Committee did. These were the establishment, but they came at their problem from a particular political place.

Reform of television news is the gold at the end of the rainbow. We think we see it, but it isn’t there, because what it requires is an inspection of  the conditions, and the prism that created the facade.

Back in 1995, a station I worked for set up by a newspaper group glimpsed that future. Everything was automated. I’m controlling the autocue with a pedal and the camera with a button. The idea was to strip television to its creative start point.

Sadly, however, the pull of conventional television wisdom steered the station in another direction. Here I am as the news presenter introducing an item of how newspapers will use the Internet in 1995

Accepting his Royal Television Award in 2014, the BBC’s Middle East Editor Jeremy Bowen spoke of an interpretive style of broadcasting that delivered an analysis of information on the spot.

He had struggled for 10 years to tell the BBC that this type of analytical (intellectual) reportage was possible. If exemplary reporters were pushing to explain the nuances of an event, departing from the ‘she said, he said’, in the course of my journey I have identified a growing number of journalists and videojournalists, who interpret the visuals and texts as combinants.

All reportage involves interpretation, but not all reportage pulls off literary or analytical schemas to surprise, or fulfill its audience. In the same way that anyone can take a photograph, not everyone’s photo will emerge as something akin to W.E. Smith or Dorothea Lange. Their artefacts did not pull punches and were cognitively dissonant.

I have come to call their craft of journalism moving image makers as videojournalism-as-cinema.

Its practitioners have developed an acute sense of how words and pictures can create any number of cinema styles for impact. The approach lies out of the conventional framework of traditional television news, but within the boundaries of expressive narrative storytelling.

The form, for traditional television practitioners suffers from a bout of cognitive dissonance.  Great Television can be cinema, but not all great cinema is television.  Edward Murrow, Alistair Cook and Robert Drew understood television as a medium where the egalitarian relationship between pictures and words – when sometimes there are no words- yielded  ‘Art’, with a small ‘a’.  In interviewing the father of the Atomic bomb,  J. Robert Oppenheimer, Murow asks a question and waits for almost a minute, without filling in the silence, before Oppenheimer replies. There is power in silence. 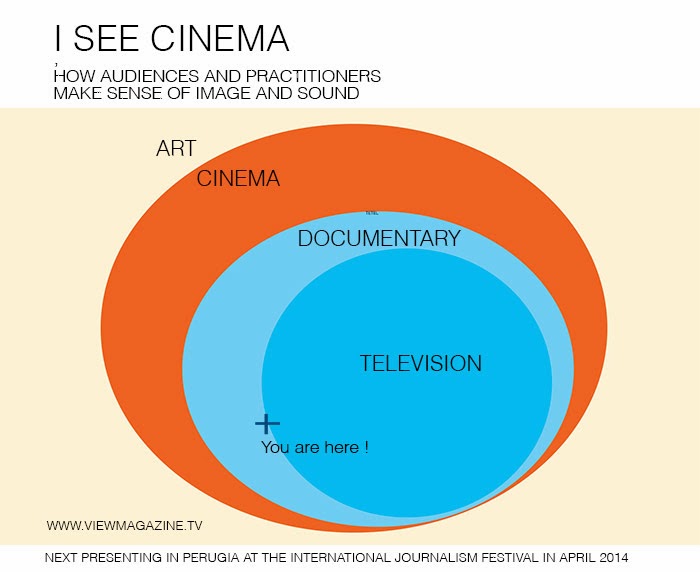 In his book Film Theory an Introduction academic and author Robert Stam writes how the future of film is situated in the possibilities of 1922, before mass communication and rigid rules would be laid down to, among others, frame television news.

This resonates with my own findings in The Cinematography of Videojournalism: Towards a creative methodology. The future has been staring us in the face for a while, but it is only now that some have come to acknowledge it. The necessary constraints of the 1940s are being removed by default.

The manner in which Television tells news is tried and tested form works, or does it? To test this premise I conducted a simple experiment using my Masters students during a news simulation day. I filmed them and produced two stories in two different ways. When I later showed different groups e.g. MA students, Chinese undergraduates and professionals from Pearson’s groups the video, I wanted to know the following:

The ability to remember video is profound, for with it comes terms like ‘immersive’, and ‘eye-catching’.  Conversely, however earnest a video story is rich with information e.g. the economy tanking, a CEO addressing staff, if the audience can’t remember or connect cognitively with the story, is it fulfilling  its role?

How, if you’re given the raw materials in a video do you make it memorable?

At the root of this question are a multitude of answers. Noel Carroll, one of the foremost film and television theorists writes in Engaging the Moving Image:

Carroll notes that even the worst banal material can keep us attuned, because of the way it’s put together; its cinemacity. This observation was one of the facets that made BBC execs in the 1940s weary of television news.

What if news makers could combine cinemacity with the flow of news information?  You may understand cinema to mean fiction film making, and while that has a currency for drawing in audiences, cinema no more means fiction films than online news means text.

The results,  are by no means conclusive, but they provide a glimpse of what and how millennials see news produced in different ways and which ones they remember.

Previous Post 10 things you need to know before having a conversation about changing news
Next Post How Art changed news, and then was dismissed
Back to Posts