Brilliant ! Awful!  How do you make it better?  Before you jump headlong into the coruscating email to the editor, the pitch to the VC to set up your station, or the panel discussion with a news executive, here’s 10 pertinent points to consider.

1. When  talking about news and how to reform it, it pays to clarify what you mean by news. Do you mean the television news bulletin of  ‘rip and reads’ (short news items read on air) or reporter-led reportage (video stories). Otherwise, as the father of Cinema Verite, Robert Drew, says you’ll end up ‘corrupting the conversation’*.

Terrestrial television news execs have a fixed idea about what news is, and texts stacking as high as the Burj Khalifa state its composition mainly in pre-2000 terms.  That is news is something important (to whom), so whilst in the Net age it can be viral, but just because its viral doesn’t make it news !  The removal of impartiality rules in the US means news doesn’t have to be balanced.

2. What audience are you catering for?  In conversation with news executives, they’ll either identify their core audience (rarely) or publicly dismiss they have one, because all news outlets want to attract large audiences across age demographics.

In reality, a defined demographic of the audience is likely to respond to your news more than another. Some news does indeed travel across demographics, but that’s a combination of compelling content and often a style of production which is classified as ‘zero style’. [see Jeremy Butler, Television Style].

p.s the model traditional advertisers use to categorise audiences based on age and income, is at odds with on line, where digital awareness and uptake is a key driver.

3.When talking to news execs about news, argue your specialism, drawing on practical examples and evidence-based research. The boon in ‘future of news’ conferences is testimony to news looking for technological leg ups. In journalism, everyone’s an expert and will articulate their fixed ideas, rarely yielding to your point of view without time to reflect, while substantiating assumptions that are already held. What works elsewhere will not necessarily work for you, unless tested.

Despite the purchasing power of the young changing in the 1950s [see Adam Westbrook’s  Delve.TV video], digital and the web have unequivocally shown YP (young people) power to be influential in boardroom decision-making. This is the BBC’s youth programme of the 1990s Reportage, which disrupted current affairs.

STORIED Videojournalism, Past, Present and the Future from david dunkley gyimah on Vimeo.

5. Discussing aesthetics and style with traditional news executives is seen as an irrelevance and any attempt to justify its impact is dismissed. Style is but a bolt on to the core main contents. But this is erroneous as David Bordwell, a celebrated cognitive film theorist explains in numerous texts. Style is the very essence of what you see, experience and differentiate between products. The style of your shoes, clothes, hair, writing, and news is central to perception and what you are.

How style affects viewers perception and interpretation of news is shown in experiment conducted on Masters students at the University of Westminster, Chinese undergraduates and staff from Pearson’s publications [see Alternative Broadcast Styles].

Broadcast style invariably refers to the onscreen look i.e. the studio and use of graphics. ITN’s nightly broadcast comes from this room. The whole studio is a virtual reality set created by green screens, as Masters students at the University of Westminster discovered. 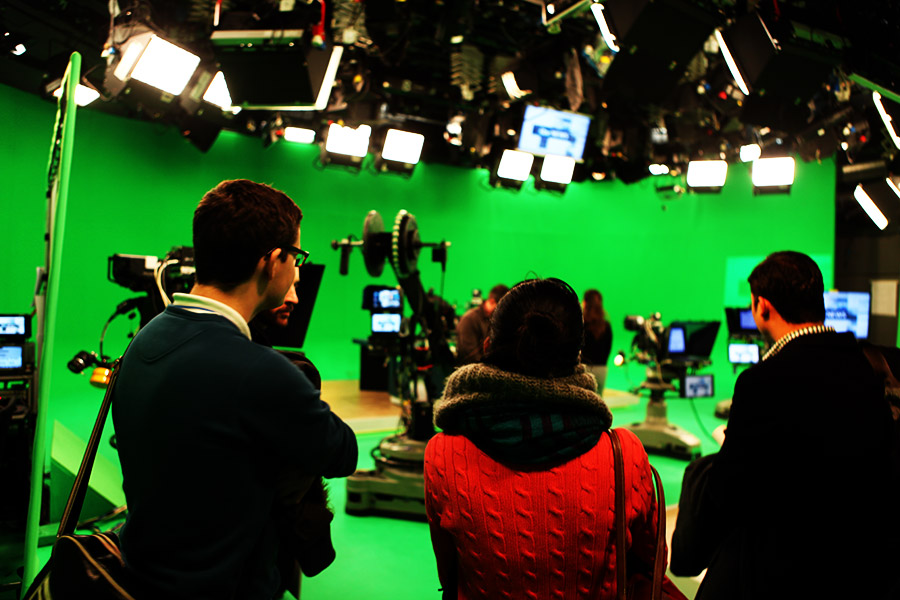 6. Is there any point in debating television news and its need for change? Of course, but in the UK television news is shaped by more than the editorial insights of teams and editors. Regulations and statutory laws, such as the Annan Committee report determined how, for instance, Channel 4 News had to be diverse.

Equally, the BBC in its charter is beholden by regulatory principles, such as being impartial, which is a ‘fuzzy fog’ open to different interpretations. In the US, the laws telling broadcasters what they should do e.g. impartiality law was dropped long ago. So it pays to know the laws, and how if any, they affect the broadcasters output.

7. ‘Television is not a medium in decline in terms of its value as a news source. Current affairs, by contrast, is considered to be a television genre in crisis’.

This is from Ian Hargreaves’ grand narrative study New News, Old News, which is one of the most comprehensive studies on news in the UK that every news exec will at some point quote back at you.

Figures from BBC research  at a Media Society presentation show how viewing news on the iPad exceeded watching news on Television screens.

8.Vice, Buzzfeed and Huffington Post are amongst online sites often sniffed at by traditional news people, because they don’t do ‘proper news’.

Television news scratches it head wondering why being an expert in television doesn’t apply to online viewing, or how social networks work, because television was the first to foster ‘social network’s ( families sitting around the living room watching z-cars’).

Sky News.com as this clip demonstrates crowd sources what to cover on its news. This undoing the notion that viral invariably is news.

9. Eminent US professor Michael Schudson defines journalism by its differet cultural values and how its shaped by social and literary factors. For that reason alone, there is no one unitary form of journalism. To say news, therefore has to be under 2 minutes, is like saying if you don’t drive on the right-hand-side of the road, you don’t know how to drive.

10. Ignore whatever any one says and just do it! Emerging user behaviours are connected to past mass communication methods.

But, digital on the one hand flattens some behaviours e.g. couch potato versus the mouse potato, Duel Screen watchers etc. Digital also draws on long tail audiences.  Sso the best way to launch your product is to be flexible and continue to test the audience.

* taken from a Q&A with Robert Drew, by David Dunkley Gyimah