Here take the blue pill and we can forget this nonsense, otherwise the red pill, plunges you into a world of possibilities.

Alas, there is no magic pill for the way television journalism’s language, news in particular, can be reformed.

RTE’s Head of News Michael Lally can boldly tell you this. Because while many theorise and think tank themselves into discussing  how to overhaul journalism, Lally did something rarely few television executives can do. He conducted a live test leaving the airwaves to non-professionals to show the professionals how to do it.

The would-be-broadcasters from a small irish town of 300 west of Kerry in Ireland were told no newspapers; no, what’s-on-the-television-already. Show us what you have and why you left some things out.

Lally supported the experiment by citing one of many stories, including this one about Charlie Chaplain. He explained:

Everyone in the local pub will tell you about Charlie Chaplain and the numerous girlfriends that used to accompany him when he came over, but no one will tell that story on air.

The inference is television’s  complicity. In reportage, the threat of being denied access to a celebrity or news provider is perhaps reason to stay away from the ‘googly’ question. The BBC knows this with Manchester United boss Alex Ferguson boycotting the network; Margaret Thatcher accused the BBC of dirty tricks when they left her at the mercy of a housewife, who tore the shreds of her enquiring why the government sunk the Belgrano; and Jim Harper voted himself off the Rumney campaign bus. OK, this last example is fictional, from The Newsroom, but if you’re a reporter watching it, there was a familiar sunken feeling to this.

After the broadcast, Lally pondered the outcome. Whilst the broadcasters-for-a-day put on a good show. They were far from radical. In fact says Lally,

What happened was the community we selected, they modelled themselves on what they knew and what they knew was us. So what they ended up doing was the same as what we do except the editorial content was different.

Academics refer to this phenomenon as intertextuality from Julia Kristerva’s 1974 Phd thesis Revolution in Poetic Language. Kristerva detected in language that ‘Every text builds itself as a mosaic of quotations, every text is absorption and transformation of another text’. That is we are locked into a framework of previous forms to help us produce new ones; new media is absorption and transformation of old media.

But what if a similar approach was conducted by someone who worked in the industry and was familiar with disruption and how different systems can come together, and be examined for their newness?  That’s how I came to use myself as one of the main planks of my research.

My rationale was as follows. I had worked for BBC Reportage. Reportage, was one of the BBC’s radical youth programmes of the 1980s. It was creator Janet Street Porter’s answer to throwing a grenade into the traditional current affairs format. While broadcasters sniffed at the production methods that brought together MTV-type filmmaking with robust journalism, Reportage’s methods were adopted by BBC programmes such as ‘Here and Now’.

There’s no difference now between the presentational style of The Money Programme and Reportage, which the people in BBC News and Current Affairs were snotty about.

I worked on Channel One, one of the most disruptive broadcast outlets in the 1990s, which launched videojournalism in the UK. As documented in Practising Videojournalism by BBC Camera woman Vivien Morgan, it was pilloried by the industry for being ‘amateurish’. However it also garnered praise at the highest level as this one year Channel One commemorative magazine showed.

In 2005 I made a film about how I trained the UK’s first regional newspaper to become videojournalists.  The film won an the International Award in Berlin for videojournalism. During the citation, the judges said something peculiar, about the film pushing the boundaries of videojournalism. I didn’t think anything of it because that’s what I have always tended to do.

In 2010, I was invited by Jude Kelly, the artistic director of the Southbank Centre to become an artist-in-residence, where I had several opportunities to play around with forms and structure. So I guess I could be the guinea pig ! 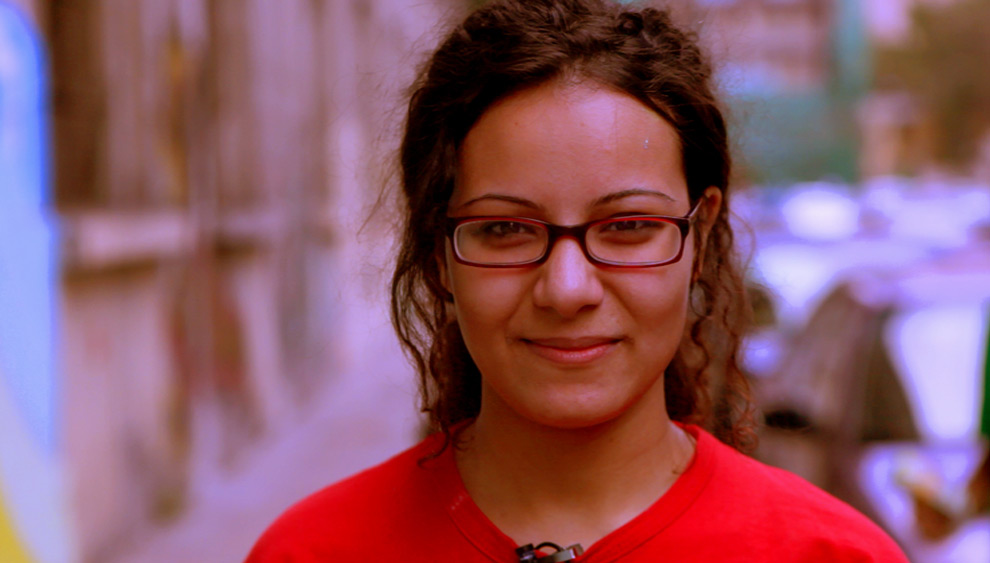 The camera continued to hold on Anne for an eternity. Then in a moment of signification, she clasped her hands together, dropped them by her side and slowly pivoted half turns like an infant, feeling isolated and regaining her composure.

Anne Alfred starred in Tahrir Momentum, a videojournalism-as-cinema production shot in Cairo in one day, a month after its uprising.  Two years later, Tahrir Memento, showing in Tunisia’s state cinema to a private audience prompted the main English newspaper to comment.

For anyone who studied classic news reporting or documentary films, it was a bit like a realist painter considering abstract art of the 1920s – surprising, confusing, and, at the same time, beautiful. “Tahrir Memento” is videojournalist’s David Dunkley Gyimah’s documentary on Egypt’s young revolutionaries. It weaves truth with sound and images to create a work of art that informs, but also stirs emotion. The frames blur, the sound grabs your attention, and the people’s stories are front and center.

Watching Tahrir Memento does not encourage the simple acts of passive viewing.  Film scholar David Bordwell, writes of a  genre of film that defies causality, where the narrative motion can stop dead in its tracks, time and space are unclear, a level of ambiguity is retained but at the same time the author’s voice screams through the text. 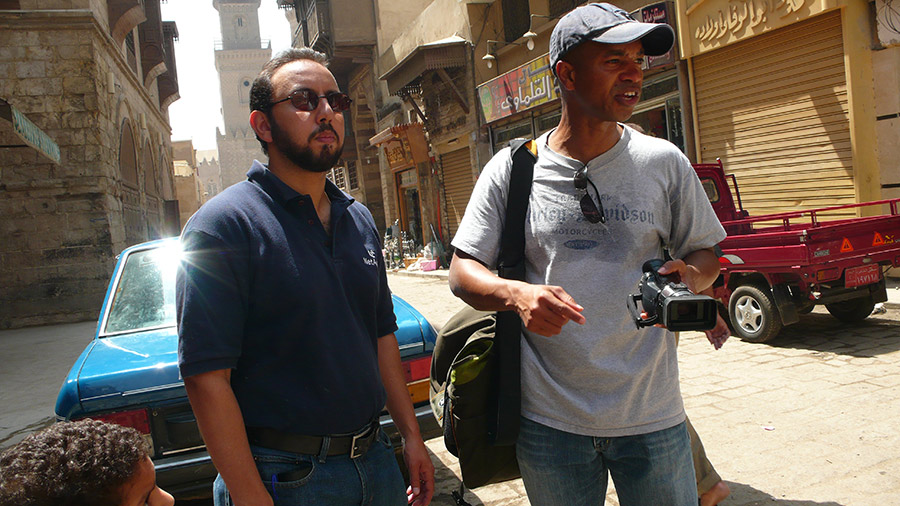 I’m in Cairo, my fifth visit since 2006 working with young  journalists at the state broadcaster.  I have been asked to speak at a conference and I have managed to squeeze a day from my visit, otherwise it was fly-in at 12.0clock, present at 1 and then catch the 5. O’clock plane back. Really! Air miles pollution!

So with the extra day I fancied telling a story of the uprising. Trouble is, it had been told ad infinitum; there were no dramatic pictures as it had already happened; I have less than a day to shoot; and the square is still not that safe to wander with a camera.

The semiotics of television and videojournalism would have placed an emphasis on reportage or at best creativity via Cinema Verite, however neither of these forms would have sufficed. Television reportage excels when there are a number of action events, and a reporter can play each side off. Cinema Verite, writes Professor Brian Winston, comes in to its own when there is a dramatic crisis the camera can walk into.

The events on the ground proffered neither. Egyptian art critic and writer Mariam Handy had written an article which I carried in my rucksack, in which she observed  that in times of conflict, it should be artists who help rebuild the future.

Moreover, anytime I asked anyone about the uprising, they went into a mesmeric oratory mode, as if reliving the whole sequence of turmoil and relief.  Reference points emerged for the style that could work, such as The Battle of Algiers. The breakdown of Egypt was allegorical to the disintegration of the nuclear family structure portrayed in Egyptian literary giant Naguib Mahfouz’s Cairo Trilogy.

One film form that envelopes these ideas, combining reflexivity and a looseness in its structure that plays with literature’s style is Art Cinema.  Bordwell characterises the style with five criteria writes celebrated film academic Kristin Thompson. They are:

a loosening of causality, greater emphasis on psychological or anecdotal realism, violations of classical clarity of space and time, explicit authorial comment, and ambiguity.

Art cinema boasts a rich heritage of films that includes the avant garde such as Ballet Mechanic and Luis Buñuel’s 1929 Un Chien Andalou. Then there’s the constrained narrative or still life spectacle of Iranian filmmaker Abbas Koristami in Five.  In Five, the camera fixes on single objects, such as rock for 15 minutes. And then we come to the saturated rich textual and film aesthetic of Oscar winner Steve McQueen’s 12 Year’s a Slave. If Videojournalism-as-cinema could mimic art cinema, that would be another style in its portfolio.

Trailer for Tahrir Memento from david dunkley gyimah on Vimeo.

Various stylistic elements define videojournalism-as-cinema in the art cinema mode, whicb are characteristic of the film: Tahrir Memento. For one, I collapse performance space and off screen space. That is when I finish a question in an interview, I rarely take the initiative to cut, either leaving the interviewee to ponder or to walk away. The effects and others, such as the portrait interview add drama to the visual text.

What all these examples possess to varying degrees is what celebrated art historian Andrew Graham – Dixon sees as the questioning of meaning. While all cinema indulges what is shown and what it means, Art Cinema playfully tests the viewer’s adroitness at cracking the film’s internal narrative.

* For more on how Steve McQueen’s  12 Years a Slave fuses art and cinema read : Future of Video : What makes 12 years a Slave an exemplary film to learn from