Ladies and gentlemen, we interrupt our program of dance music to bring you a special bulletin from the Intercontinental Radio News.

And so H.G. Well’s adaption of war, War of the Worlds, floated through the electronic ether.

Slowly, commentators talked about a build up of anxiety amongst listeners that spread to the population at large. At a time when the world was inching towards real war, half-way across the world Hitler had taken Czechoslovakia, there was a reason for such collective fears.

One of the US’s most trusted broadcasters Edward Murrow noted In the Night America Trembled ‘Everywhere, emotions and reactions were the same. Panic struck universally out of the dark, but peaceful sky’.

Accounts of how widespread the panic was have been contested. However, what appeared clear was that America was being invaded – by aliens.

Sound radio at the time of the War of the Worlds‘ broadcast was still finding its feet. It was barely a decade old, but in 1938 in its short history it had been presented to the public, it had come to signify ‘truth’ – something a 22 year old dramatist says he set out to exploit.

Orson Welles speaking on the Arts show Monitor in 1960 wanted to debunk the medium and adds that the resultant hoax had a ‘cry wolf’ effect on the nation three years later when the Japanese bombed Pearl Harbour. When the attack was announced, interrupting a broadcast, Welles says bemusedly, people went: ‘there he goes again’.

Three years later Welles would create another spectacle producing what is recognised as one of the best movies ever and Citizen Kane and with that prove to be a polymath – a figure who could work in several areas.

In the media there’s a recognisable cross-over of personnel from radio to television documented in Conway’s The Origins of Television News in America; the most prominent at the inception of television being Edward R. Murrow. In England, the leading work of radio turned television producer Grace Wyndham Goldie shows similar behaviour.

However, generally any attempt at working officially across both medium in situ, labelled bi-media, had not even in the early 200s been an easy flow. It’s been scorned, rejected by employees and tried the patience of media executives.

In the 1990s, the BBC under John Birt instituted a policy towards bi-media operations,  much to the annoyance of BBC personnel who would argue if they wanted to become television producers, they would have hankered for these jobs in the first place.

Some like Jeremy Timmins,  Head of Africa and Middle East for the BBC World  (WS) service, who in the 1990s was a WS radio producer embodied this new type of journalist – at home in radio, as much as he was reporting or producing complex issues on BBC Newsnight. BBC staff, writes David Hendy in this new editorial drive moved to White City, where one of BBC radio’s executives called their new bi-media set up, ‘ a journalism factory’.

The gloves are off

In 1994, the boundaries separating television disciplines were breached thus heralding multi-skilling as a general broadcast industry term, which was reluctantly accepted by the National Union of Journalists. The antipathy to multiskilling was as naked as it was often violent. Staff at a new station called Channel One were on several occasions verbally or physically abused by production crews.

To critics, says Richard Griffith author of  Videojounalism, it was creatively impossible to replicate the craft skills of technicians if the hapless journalists was doing everything themselves. In 1999 the BBC officially did a U-turn on bi-media, under the control of the News chief executive Tony Hall, now its Director General. Whilst the Nations and Regions, in a bid to increase its news coverage at a cost effective tariff was considering videojournalism.

While there is broad acceptance over multiskilling today, Videojournalism-as-cinema represents another layer to the have-your-cake-and-eat-it-too in media. It will be rejected by institutions, much in the same way they’ve rejected past efforts to increase efficiency and explore new ways of working.

However, unlike videojournalism whose very presence is directly related  to multiskilling the work force as its key management stroke, Videojournalism-as-cinema focuses on the practitioners command of the multifarious productions and stylistic techniques in media that extends beyond television.  Perhaps, the more intricate of them all the craft of cinema making.

Cinema evokes varying interpretations as  noted in Frampton’s Filmology, from its philosophical moorings detailed by the French philosopher Gilles Deleuze who says its meaning emerged from the film making process, ‘as a new art is demanded new thinking’.

Walter Ruttman’s Berlin, described as not a pure documentary, led the Hungarian filmmaker Bela Balaz in 1949 to comment that films made in this way film show us invisible emotions and the process of thinking.

Cinema, we quickly learn wears fiction as just one of its many hats. As a visual medium it demonstrates how it is infinitely interested in the language of literature (rather than fiction per se), revelling in not only what is said, but the unsaid -the implied – and the uniqueness of authorship. Cinema is the river from which sound radio and television sprung and to varying degrees became tributaries and Oxbow lakes.

Welle’s sets the tone for the earliest frameworks for sound and cinema and I am one of the many who was inspired to create their own epic sense of radio broadcast.

Michel Chion refers to the power of radio in what he calls acousmatic, ‘sounds one hears without seeing their originating cause’.  Welles’ ‘Rosebud !’,  Robert Bresson’s A Man Escaped,  Micheal Moore’s Fahrenheit 911 – the screen is blacked for almost a minute as the viewer is enveloped with sounds from the 911 attack and the clicking of billiard balls in The Colour of Money.

We owe the hypertense and speed of much current cinema to the influence of sound, that we daresay, has seen its way into the heart of modern cinema.

While, radio is acousmatic by its very nature,  its effectiveness is enhanced by characteristics of the sound: tone, ambience, temporal quality of the speakers, accents, canter and how they coalesce in a particular arrangement to create a sound score – cinema in the mind. 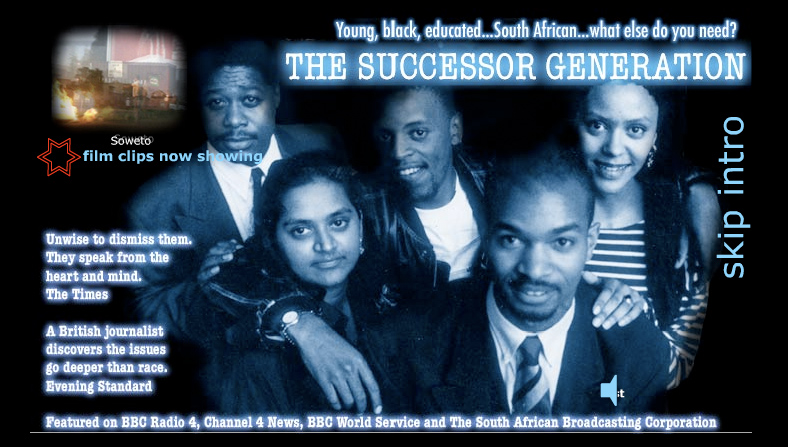 In 1993, BBC Radio Four commissioned a 40-minute radio broadcast which was at first to be called the ‘Successor Generation’. It sprang from an article I had written for the BBC’s internal magazine, Ariel. Four South Africans in their twenties who had never been able to vote in their lives would be casting their first vote. What did they think? How did they see themselves in a new minted South Africa?

Two of many questions which covered four errudite youngsters, all different in many ways: a comedian/ actor based in Johanessburg. An activist and part time model, the country’s first black stockbroker, and a feisty journalist/trade unionsist from Durban. Two men, two women bearing their souls and representing a generation.

The documentary was produced by one of the BBC’s creative programme makers, Joy Hatwood and by the time, the it was ready for air, it had become First Time Voters.

It was the only foreign broadcast to be given this privilege by preceding their historic election and resulted in a 15 minutes of fame, a double page spread in the Star newspaper, replicated in 1999 when I returned to see how the four first time voters were doing.

Radio’s demands on creativity were further realised in the production of The War Grave Dives, in which I followed a crew of professional divers inspecting the wreck of a famous World War One ship.  A microphone waterproofed with a condom collects the breathing of the divers 15 metres below.

In my 2014 Videojournalism-as-cinema, We Are Syria, radio’s acousmatic qualities, the learning experience of Welles War of the Worlds, is evident. The difference is Syria’s war and the fear it generates is anything but real, in creating cinematic  experiences.